Request from a Reader

We are hoping someone can help out Wendell, who submitted this comment (below) looking for information on the current owners of the Fratt Mansion. There is a lovely informative article about the home, its current owners, and its restoration on the National Trust for Historic Preservation’s website. If anyone has more information for Wendell, please let us know.

We just wanted to give a big THANK YOU to our volunteers who have been helping us organize and catalog our wonderful collection of artifacts – a big project. We couldn’t do it without you!

Did You Guess Correctly?

Posted on February 13, 2012 by everettmuseum

Can You Guess What These Are?

Posted on February 10, 2012 by everettmuseum 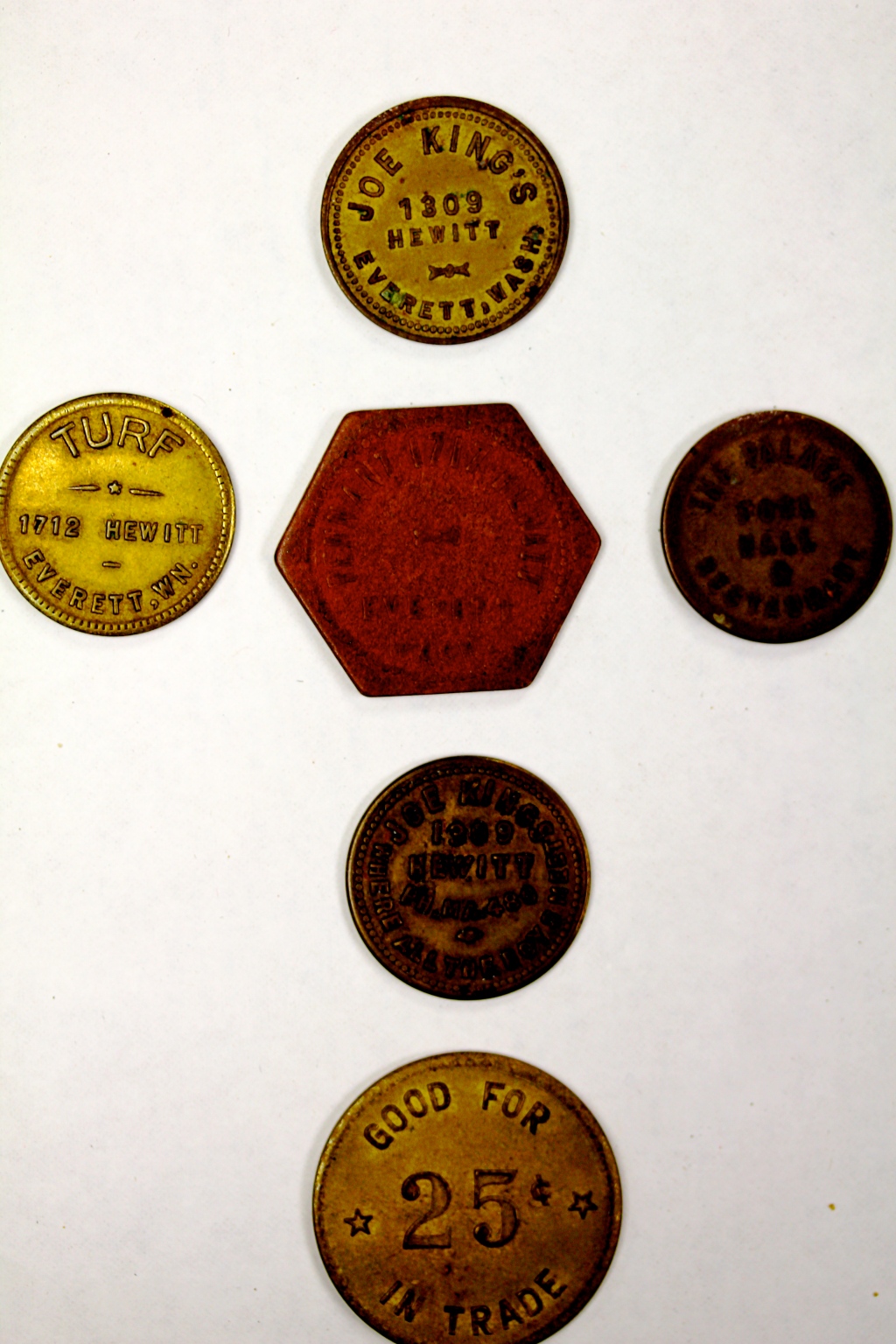 Posted on February 9, 2012 by everettmuseum 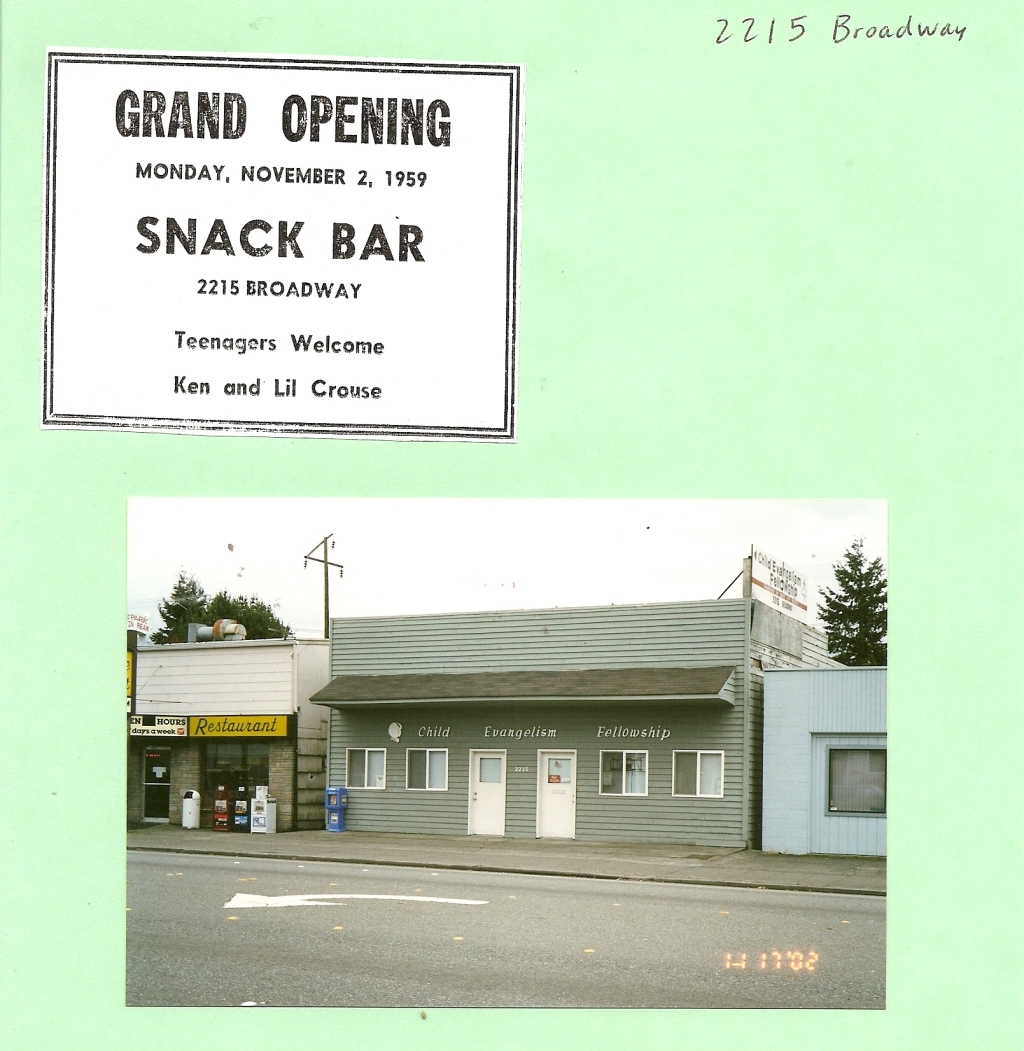 Washington Territory’s first doctors prescribed and made their own medicines compounded from plants.  Plant leaves, roots and seeds were ground into powders and made into pills, liquids and plasters.  Widely used were belladonna for headaches and cramps, bloodroot for throat infections and foxglove (digitalis) for the heart.  Each prescription was “tailor made” and dosages often varied as well as plant combinations.

But there were early drug stores as well, such as the one run by Lot Wilbur in Snohomish who first set up at a temporary location and then settled in to a permanent place at 1201 First Street.   By the time of the first Polk’s city directory in 1893, Everett listed the Everett Drug Co., Hawley’s, Lytle & McCauley, Watkin’s Brothers and Webb’s.  Two pharmacies that would have a long life were Tozer’s (1901) and City Drug (1917).

The Eli Lilly Company, located in Indianapolis, Indiana, was one of the earliest large pharmaceutical companies, its roots going back to the Civil War.  More large companies formed in the U. S. in the early twentieth century.  Gradually chemical drugs began to be made available, under professional supervision, insuring greater consistency and safety.  At the same time, many pharmacists continued to compound their own medicines for decades.  By 1970, only about one percent of prescriptions were compounded.  Today medicinal compounding is continued mainly through traditional Asian, homeopathic and folk medicine.

1933 During the Great Depression, there were 17 pharmacies in Everett and 16 others in the county.

Posted on February 1, 2012 by everettmuseum

When LeRoy Carter came to Everett in 1946, he didn’t plan to stay.  World War II had just ended and he was serving aboard the cargo vessel USS Tate.  The ship had been damaged in the invasion at Okinawa and was brought to the Everett Shipbuilding and Drydock Company for repairs.  A blind date with Marilyn Nowak changed his life.  A year later he and Marilyn married and soon went into business partnership as well, starting Carter’s Drug Store at 2215 Broadway Avenue.  Their marriage lasted 61 years and they ran the store for 41.

When Pearl Harbor was bombed on December 7, 1941, Le Roy was in his senior year at a North Dakota college, planning to become a pharmacist.  His school  allowed him to fast track courses so that he could obtain his pharmacy license before enlisting in the Navy.  Marilyn was an Everett girl, born in Tye, Washington, who had moved with her family (the Nowaks and the Goldthorpes) following a fire that destroyed the small town in the late 1920s.  In Everett, she attended Garfield, North Junior and Everett High schools.

Following a large wedding—with five bridesmaids and a wedding cake made by collecting wartime sugar rations—LeRoy and Marilyn took up residence in Everett.   Le Roy began working for Herb Knudsen at City Drugs, a business that could trace its roots to the early 1900s.  With financial backing from his father, Le Roy was able to begin Carter’s Drug Store in a building constructed by Marilyn’s aunt, Naomi King to house a snack shop and the pharmacy.  From the start, Marilyn was a full-time business partner, not only helping Le Roy but working in the snack shop as well.

The Carters had plenty of competition.  When they opened their doors in 1948, there were already 22 other drug stores in town.  In order to succeed, Marilyn and Le Roy knew they had to work harder than the rest.  Other drug stores in Everett were closed on Sundays and on week days were open only until 6 p.m.  Carter’s was different.  The drug store operated every day—even holidays—from 10 a.m. to 10 p.m.  Marilyn recalls that LeRoy once worked for 18 months straight without a day off.

To local residents, the Carters were family.  They were trusted and respected and their good reputation extended well beyond Everett’s boundaries.  It was not unusual for customers to travel long distances on holidays for needed prescriptions and over-the-counter medicines.  In Marilyn’s words, “Fourth of July was wild” as they often treated injuries from fireworks.  In the 1940s the practice of “clinical pharmacies” had begun, which allowed licensed pharmacists to offer patient care in emergencies, thus optimizing the healing.  And physicians trusted Le Roy to prescribe for their patients while they were away.

Having lost his mother when he was young, LeRoy considered Marilyn’s mother to be his own mom and she came to live with them.  When the Carters first baby arrived, Grandma Nowak helped with the child care. But often, the Carters cared for the baby in the pharmacy while waiting on customers.   The Carters raised a son and a daughter.  When the children were older, they worked in the pharmacy on holidays and customers would stop by to give the family holiday greetings.  At times when a customer needed medicine for a child and could not pay, the Carters did not charge.

“We started from our first roll of Tums”

Carter’s sold greeting cards and gifts, along with drugs.  Marilyn became clerk, buyer and a Class A Pharmacist Assistant, which allowed her to count and package pills and keep business records.  And on the occasional times when they briefly did not have a delivery boy, she and Le Roy personally delivered orders to homes and businesses.  Marilyn remembers one delivery vividly.  The customer was a local tavern owner.  Marilyn was pregnant at the time and that day had to take her older child along with her in a stroller.  She chuckles when recalling the tongue-lashing she received from a concerned woman watching her enter and exit the tavern, one child in tow and another on the way.

The Carters entered the pharmacy business at the height of the polio epidemic.  Marilyn remembers the huge relief that came when a successful polio vaccine was made available in the 1950s.  At this time also sulpha and penicillin were beginning to transform medical treatment of many illnesses.  A big scare would come in later years from HIV and, in the first years of its diagnosis, even pharmacists feared coming in contact with ill patients.   Part of a pharmacist’s work involved educating the public about disease prevention and medication.

But drugs themselves could also be the culprit and patients generally came to their pharmacist first if they had an adverse drug reaction.  This practice ended as insurance coverage became a necessary part of the pharmacy business.  There were sometimes substandard drugs on the market too but Le Roy made a practice of dealing with only respected pharmaceutical companies. 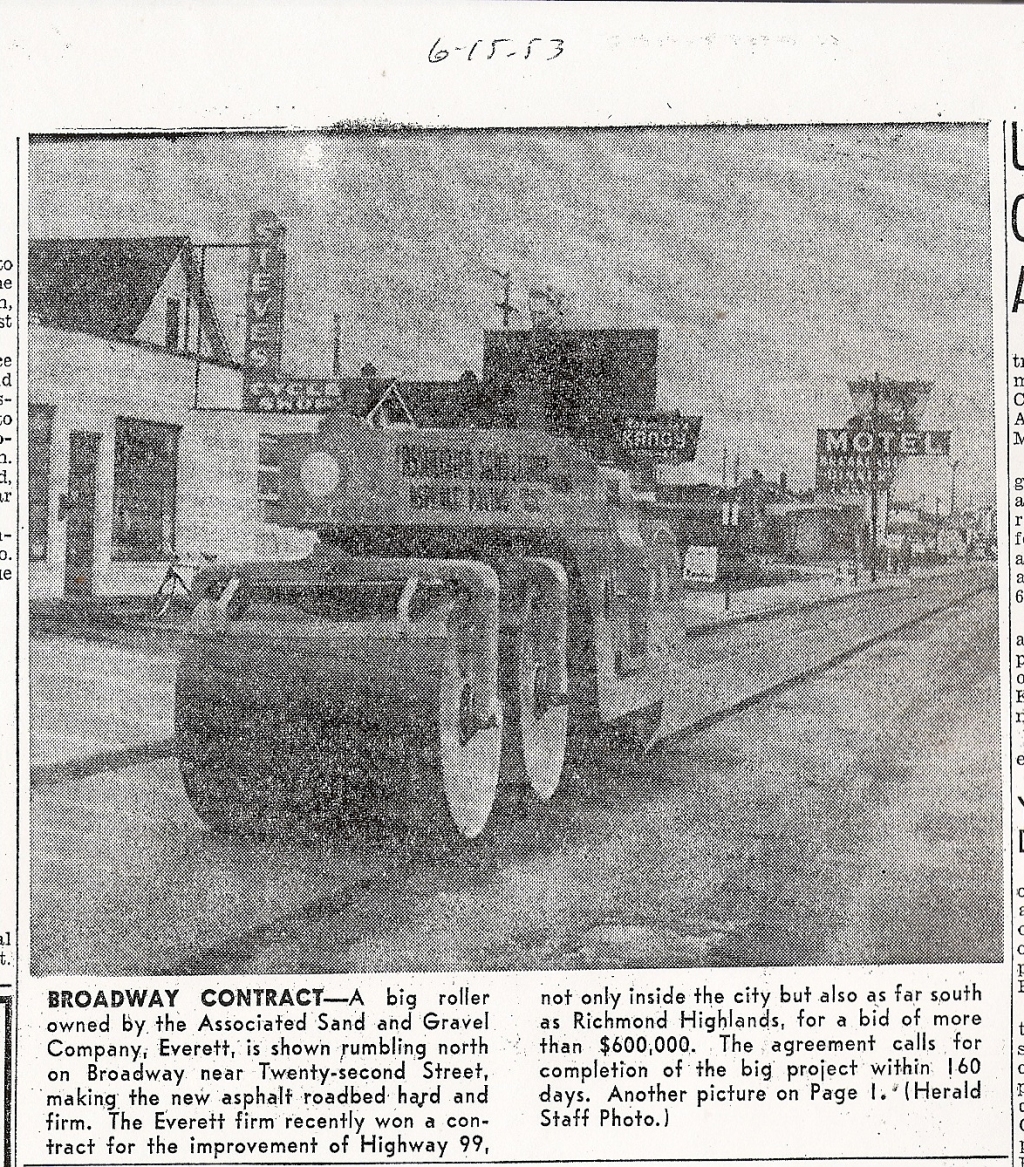 In the 1950s street improvements were made to Broadway Avenue and Carter’s opened in a new store.  After seven years in its original location, the pharmacy was moved to a new concrete block building a half block south at 2227 Broadway.  The new store featured a towering neon sign, lots of plate glass, a blue and white interior color scheme and a terrazzo floor.  They now had more elbow room.  Carter’s Drugs officially opened in its new location on April 1 and 2, 1955, offering gifts to all who stopped in on those days.  The Carters promised to provide a complete line of pharmaceuticals and sundries.  In the years that followed “sundries” even included chocolate eggs that Marilyn made and sold at Easter.

Three of Everett’s largest pharmacies were Carter’s, Tozer’s and Owl Drugs.  Eventually the Carters owned all three, Marilyn working shifts at each one.  After 41 years in business, the Carters retired and sold the pharmacy to Jerry Rock who continued the pharmacy under the Carter name for another decade.

Today both Carter’s Drug Store buildings, as well as the Carters first home, are gone.   LeRoy died on January 2, 2008, at the age of 87.

As a tribute to the history of early pharmacy, Marilyn has given the artifacts she has saved from Carter’s and Tozer’s to the Marysville Historical Society and hopes to see them one day displayed to show the history of pharmacy over the years, from the days when medicines were compounded from plants to the rise of large pharmaceutical companies and ever-newer medications.

From historian David A. Cameron, originally of Everett, now Index.

“What I remember most vividly was when we needed prescription medication on a Sunday early afternoon, the only place we knew would be open then to fill it was Carter’s.  I parked on the corner, walked straight back to the counter, and was tremendously relieved that it could be filled right away.  As I waited I recall wandering the aisles, looking at everything in stock, especially the local Washington products which were being featured.  I had a real feeling of gratitude that the pharmacist would be willing to work on what normally would be a day off with family just in case someone had a problem which couldn’t wait.  Nice people!  That was at 2227, probably in the 1970s.”

“There was a script neon sign above the pharmacy in the back (east side) of the store (at 2227).  As I remember it started lower and then went up to the end of the word.  As I recall, Marilyn Carter told me she had designed that.  I also remember ordering goodies.  I remember buying some poker chips there as they had an odd lot of things.  The hot nuts were delicious.  It was a great store and sometimes the only pharmacy in town open at odd hours.”

Posted on January 3, 2012 by everettmuseum

If you’re interested in Everett history from a first-person POV you should definitely check out Everett Public Library podcasts. What an amazing resource with great stories!

Posted on December 26, 2011 by everettmuseum

We were so excited to be offered some amazing items from the historic Everett Stoveworks. While we are still in the process of accessioning the objects, we wanted to share with you. More to come! 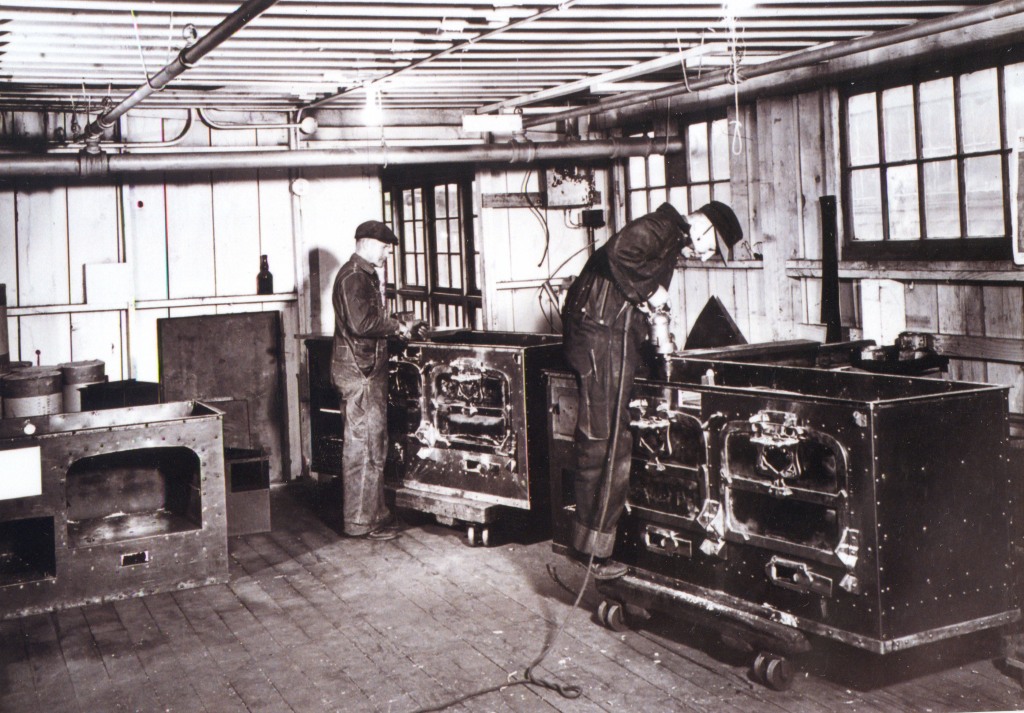 Posted on December 21, 2011 by everettmuseum

The Museum has many treasures in its collection – one of the largest and most impressive is the captain’s wheel from the steamboat the Black Prince.

Dating from 1901, the 8-foot radius wheel graced the all black boat named after a dream of Captain Charles Elwell.

The wheel was so large, in fact, that it did not actually fit in the wheelhouse and stuck out the doors. Later wheels made for the boat were much smaller. Built by the Snohomish and Skagit River Navigation Company of Everett and powered by two extremely large (10 by 48 foot) steam engines and a 100 horsepower brickyard boiler, the Black Prince worked towing logs for the prolific sawmills of Everett. The hull was 93 feet and rated for a tonnage measurement of 159 gross tons.

Decommissioned in 1935, it was offered for the token sum of one dollar to the Everett Yacht Club by then Captain Harry Ramwell, owner of the American Tug Boat Company, who had purchased it in 1922. The boat, after a remodel and being shored on timbers, became the Club’s official meeting room on July 3, 1936 and was utilized for community functions including Everett High School dances.

Loaned to the Museum in 2007 to celebrate their 100th anniversary, it took 5 men to move the approximately 600 pound solid oak wheel.

Join Us for Our 2011 Annual Meeting This Sunday!

Posted on November 29, 2011 by everettmuseum